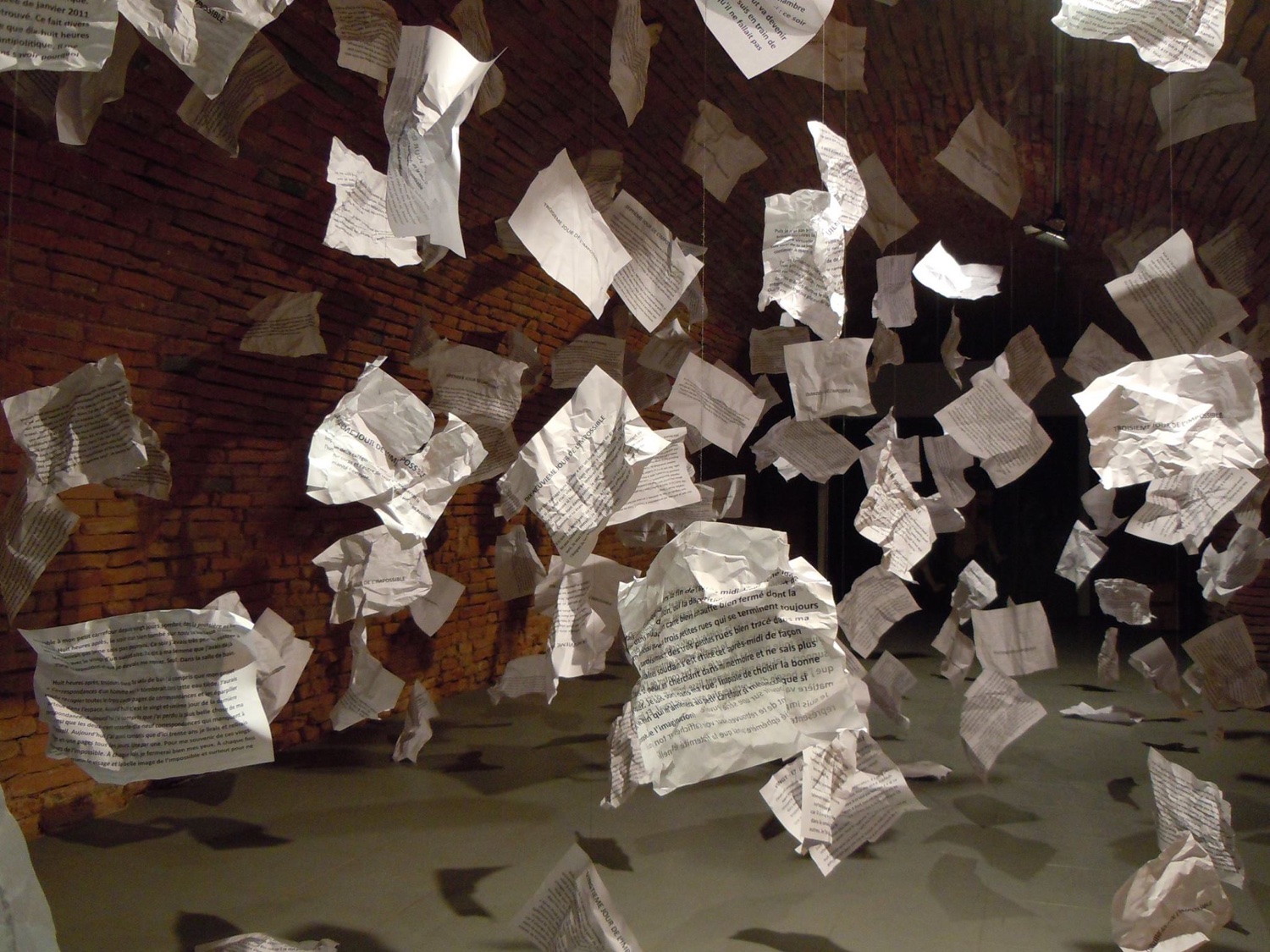 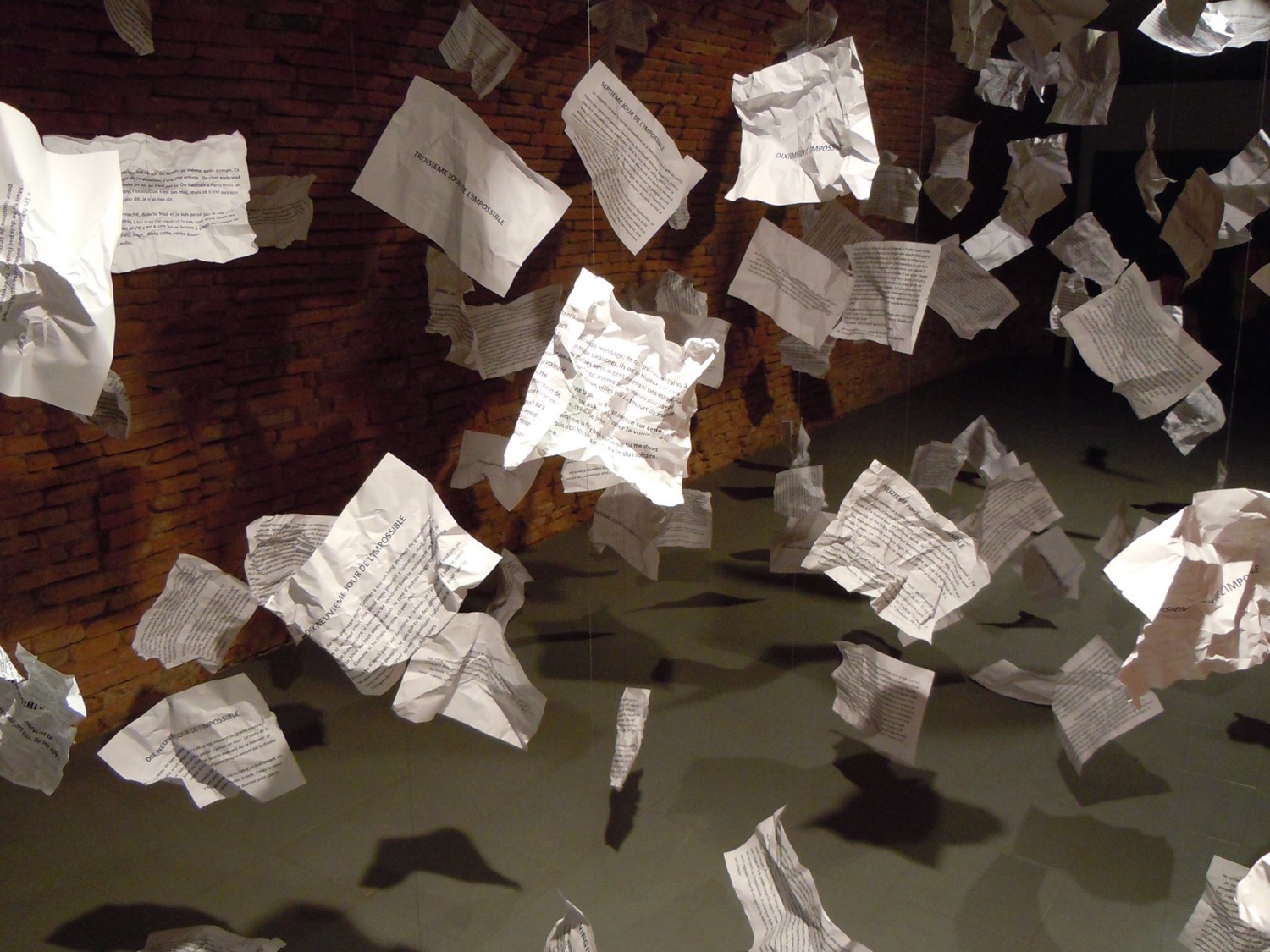 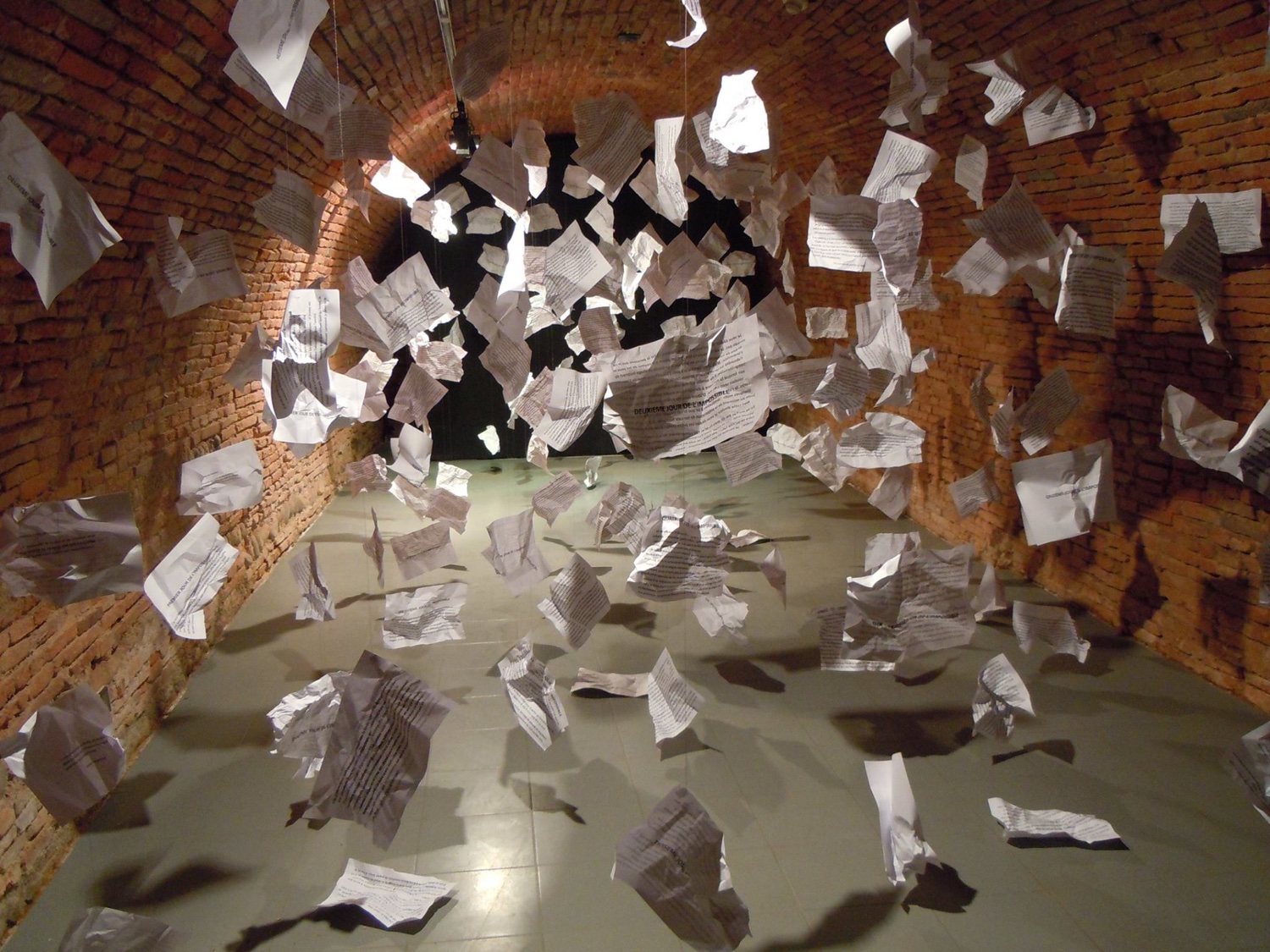 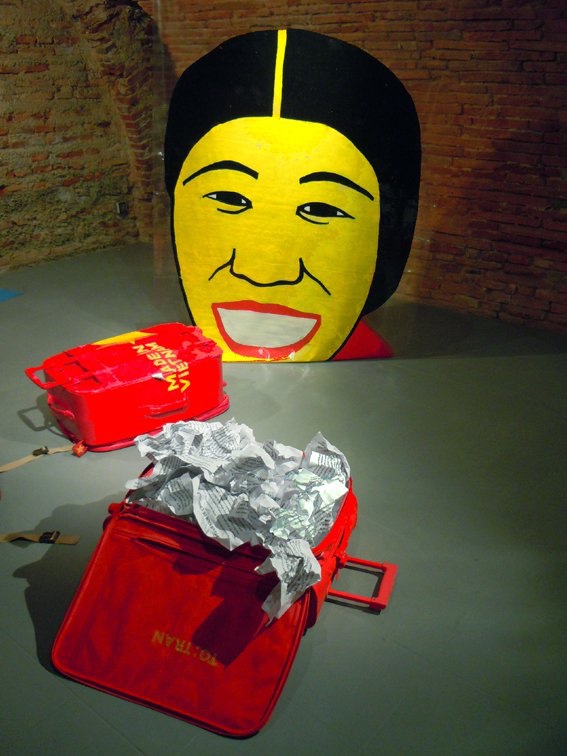 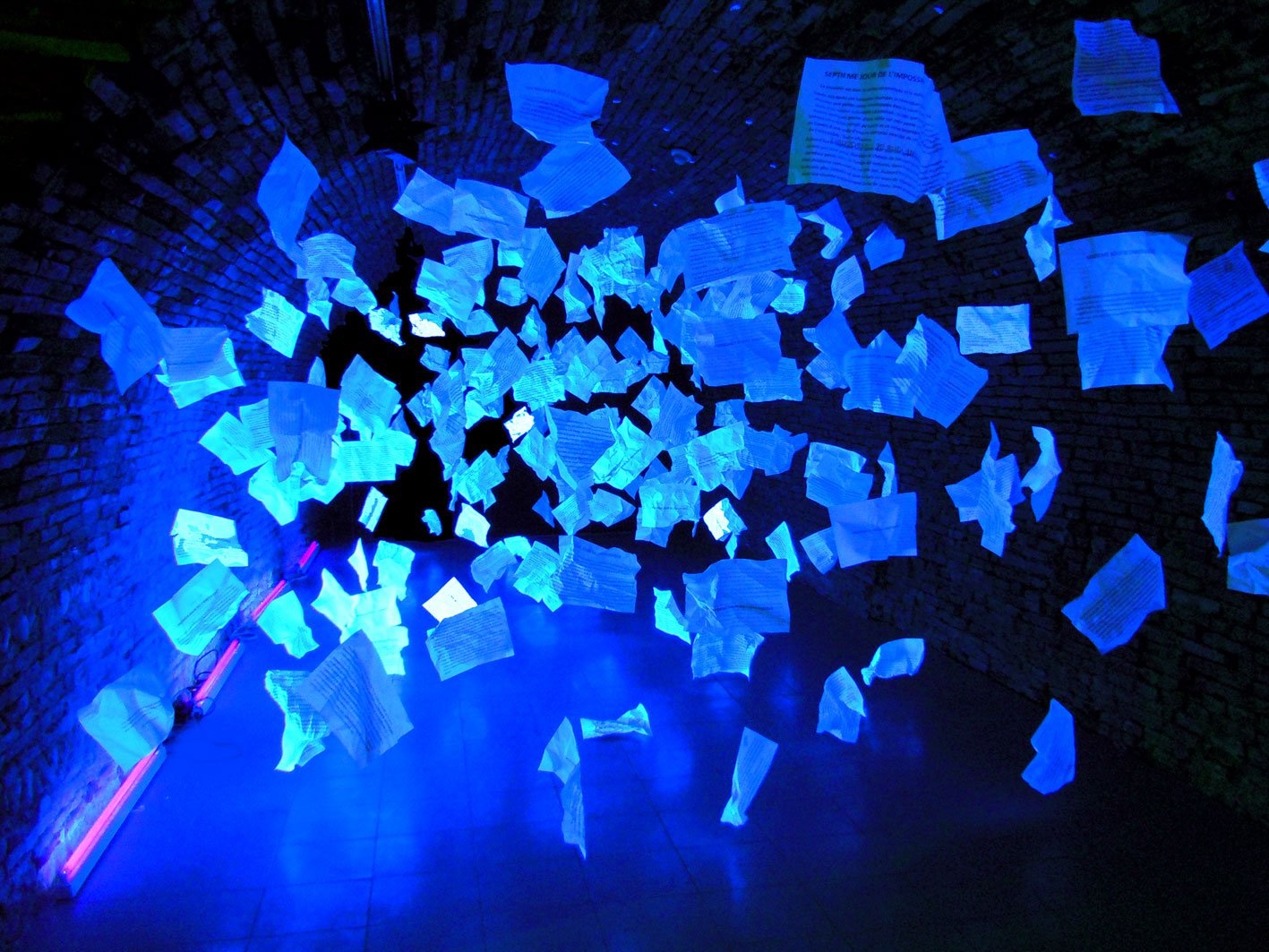 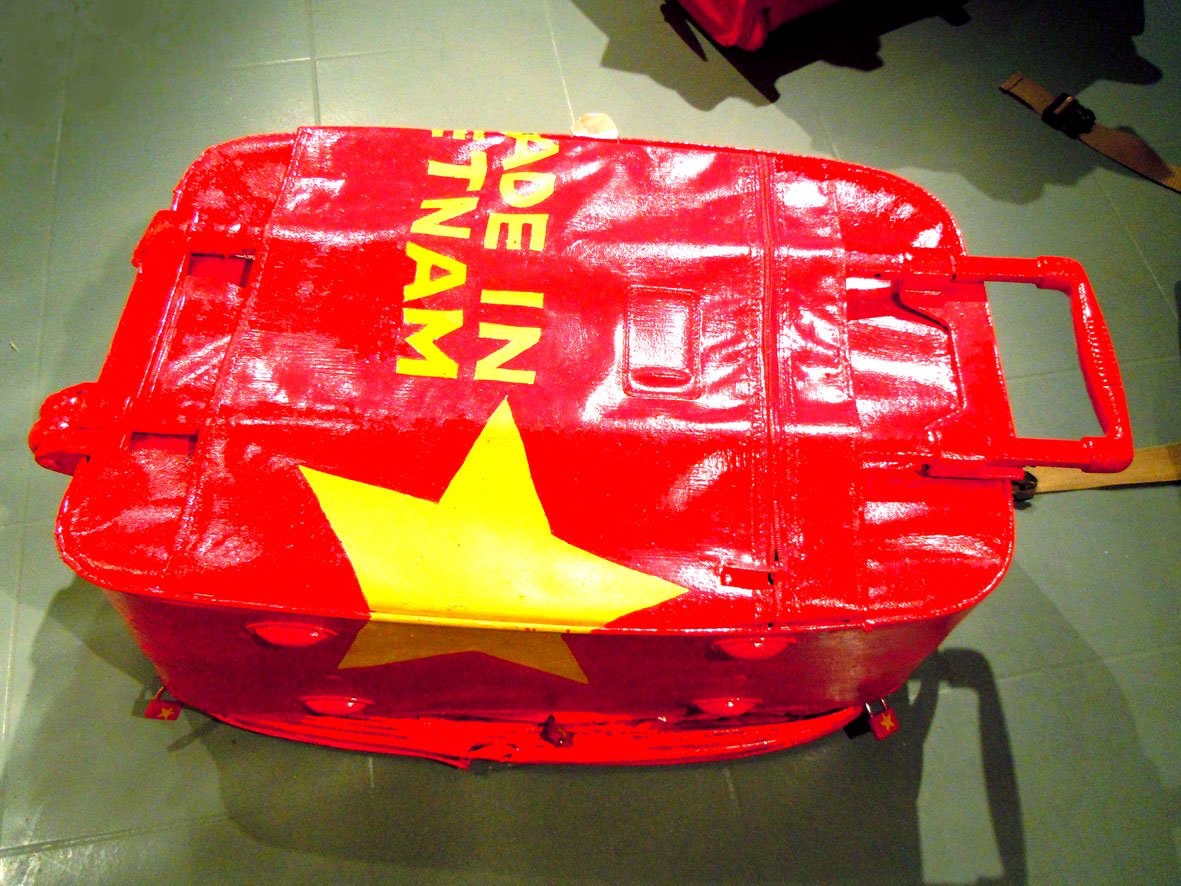 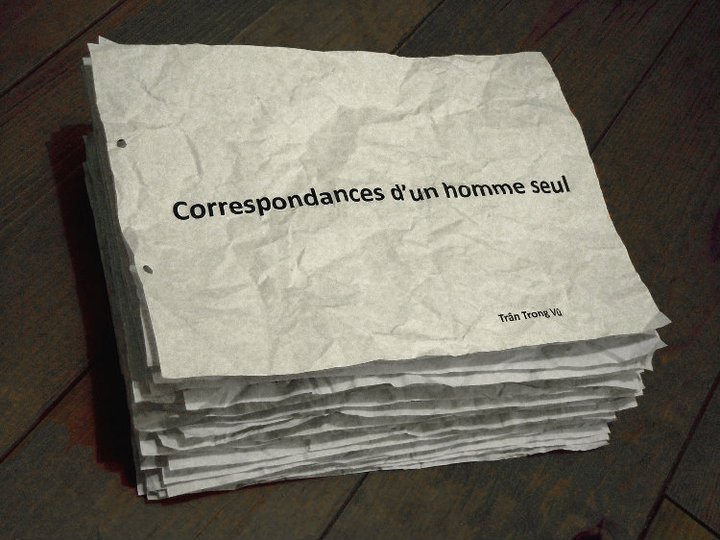 The possible – the impossible

The real – the unreal

Entering the exhibition is like entering the painter’s life. Upstairs, public life, political experiences, war, its absurdity, its logic, artificial façades, fake, empty smiles that we present to the world. The calmness of the color blue numbs the body, which dissolves without pain, unaware of its own disappearance. Is it not important to always smile ? Here it is expressed that by lack of vigilance, we lose ourselves. Downstairs, the caves become chambers of intimacy and speak of exile, an empty-handed departure, the suitcases he never had, filled with memories, ties to his father – writing.

The correspondences of a single man are a story that unfolds.

Three forms: a book, crumpled, then un-crumpled, whose twenty-one pages you can now read. Its pages, suspended in space, that can be more or less read. We thus travel, faces towards the sky, in an illegible novel. And finally, crumpled pages in a suitcase, overflowing and showing the disappearance of a person who left without a suitcase and without a trace, except for what Vũ invents, mixing his life with the daily news, which echoes his own departure, his own wanderings. He who was able to be born a second time. He did not get lost. His suitcase was filled with words. But the words in this fiction are too painful – a narration whose pages crumple…reading them, like writing them, is uncomfortable. You have to tell a story not to disappear. Vũ tells his story as a painter would – his shapes complete it where words cannot be written. “Eight hours earlier, the man got a brief phone call. He understood everything. He understood that love is but a utopian proposal of the impossible. He understood that it is but a dreadful little fox and that his love is simply subject to the ridicule of others. Later in the evening, he shut himself in the bathroom. In the mirror, he saw all twenty-one pages of the unfinished correspondence fly. He saw the man cry in impossible pain, in a disillusion of impossible love. Then he saw him fall onto the cold tiles, light as a tree branch.”

Vũ’s paintings battle with life (paper is crumpled, flowers are restrained to their cage or are faced with soldiers…). It is his own way to go into the world. And he knows how to invite us in: paintings colorful, attractive, translucent; we approach them, recognize ourselves within them. It is then that the trap closes and we experience the pain of exile, we discover the shame in retelling it.

Leaving without taking anything away from it means never putting down your baggage. Bringing your baggage with you to an exhibition. Is it even possible?